City Informer: How Did the Spanish Flu Impact Vancouver?

Look, I’m flattered that you think I know anything about the future. Really, it is such a compliment and, importantly, it makes me feel like I could pull off a psychic-chic silk turban or at the very least some sort of drapey robe. But my job isn’t to make up cryptic enigmas to help you pretend you have control over your life (I’ll leave that to QAnon or the Co-Star app), it’s to get to the bottom of things using the power of cold hard facts and/or to make sure this column is at least 400 words! So if I’m going to speculate wildly about what tomorrow and a post-pandemic life may bring, you’d better believe I’m going to root it in deep research and analyses of historical patterns, ideally collected by someone who did not spend her required Stats 104 class trying to make a page-flip animation of a stickman taking off his top hat in the corners of her textbook. (Yes, it worked! Yes, I got a C-!)

As a wise man (I wanna say... Sting?) once said: “To move forward, you must look back... unless you are in the middle of taking your driver’s test, I cannot stress this enough.” To predict where we’ll be in 2022 when Canada opens up again and we’re all filled to the brim with delicious vaccines, we can take some cues from a pandemic of the past: 1918, when the so-called Spanish flu was devastating a young ’Couv.

I know this is typically a jokey column (for example, I know Sting didn’t say that thing about looking back and also that in no situation could I ever pull off a psychic-chic silk turban!), but there’s no glossing over the fact that the 1918 flu was brutal. It killed 50,000 people in Canada, including one percent of the population of Vancouver, primarily people between the ages of 19 and 39. The city had the third-highest mortality rate in the world. I don’t want to make light of what a huge and tragic loss that was.

But I think we can all agree that the misguided attempts to cure that flu are worth mocking. For instance: something called “goose grease” was wildly popular, though it is unclear to me if that’s something made from geese or to use for geese (maybe both?). People were wearing masks that fit just over their nose like a little cloth beak. And Dr. Henry Esson Young, basically an old-timey Dr. Bonnie Henry, was urging people to avoid low necklines and wet feet (prude).

Similar to our modern-day situation, businesses, schools and churches were shuttered to stop the spread, and employment dried up. Sure, this gave everyone more time to grease up their geese, but, economically and socially, these measures only amplified an already tough wartime situation. It was the platonic ideal of “No Fun City.”

(That being said, not even a pandemic could stop people from gathering to watch Harry Gardiner, “the Human Fly,” scale the outside of the World Building. I mean, if you’re going to catch a life-threatening flu, I honestly can’t think of a better way to do it.)

But though Vancouver went through some horrific losses a century ago, I’m pleased to report that those dark days didn’t last forever. When the “all clear” was finally given in October 1919, everyone presumably threw their nose-masks in the air like graduation mortarboards and took a deep breath of the sweet, sweet scent of all the hedonism in the air. 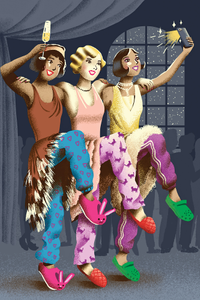 Of course, there are always a number of factors that impact how and why the economy thrives or flops (resource management, how cute the people printed on the currency are, et cetera), but there’s no denying that the dual end of the war and the pandemic were instrumental in creating a real, as the French say, “Vengabus” sort of vibe. Ships full of heroic boys were back home, and tongue-kissing was medically sanctioned once again! Why wouldn’t people want to celebrate?

And so sleepy, scarred Vancouver slowly but surely Charleston’d into the Roaring ’20s. It was a prosperous time: a veterans housing program kept builders hard at work, and the busy sawmills and ports brought tons of people through town.

Even restaurants boomed again as businesses bounced back and operating costs dropped. (The end of prohibition around this time also probably didn’t hurt.) Goose grease sales, of course, tanked and, sadly, have never recovered.

The new Ballantyne Pier became the British Empire’s most technically advanced port. For those of us who don’t care about shipping infrastructure, there were also some wins in other arenas: the Orpheum Theatre and Hotel Georgia were built in ’27; the Marine Building and Hotel Vancouver both began construction in the late ’20s. The stock market was soaring and people were spending with abandon, living their best YOLO consumerist fantasies. In fact, things were going so well economically post-pandemic that Vancouver replaced Winnipeg as the leading city in Western Canada. (Suck it, “Friendly Manitoba!”)

So! Based on all this, if I were to look into my crystal ball (which, if my accountant is reading, I will be claiming as a business expense) I would predict that post-pandemic Vancouver may look just as vibrant and lively as we all emerge from our COVID cocoons ready to live life to the fullest... though, that being said, the best thing about answering a future-looking question like this is that there’s no way to prove me right or wrong. Another job well done!

Thanks to Andy Yan, Michael Kluckner, John Atkin, and the Friends of the City of Vancouver Archives for your insights!

Got a question for City Informer?
stacey.mclachlan@vanmag.com