The Burger Chronicles: Can Pigot's Burger Club Break Into Vancouver?

Okay, I'm just going to get a few biases out of the way right off the bat. As a rule, I don't seek out "TV chefs." And especially during the pandemic. I'm an all-local, all the time sort, so it's fair to say that Pigot's Burger Club, a Calgary concept imported from Chef Mike Pigot who's an alumni of something called Guy's Grocery Games has a tiny bit of an uphill climb to wedge itself into my burger routine. On the other hand...burgers. And on the other other hand, Pigot (pronounced pee-jo) has brought aboard Chef Alex Chen to create a signature burger for this venture and I have all the time in the world for Chef Chen so maybe that evens out the playing field. 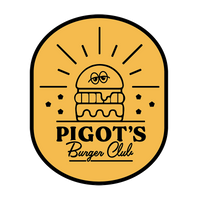 This is what's now known as a ghost kitchen, meaning that there is no restaurant per se. It's made for delivery, via one of the now ubiquitous delivers apps: Skip the Dishes, Uber Eats or Door Dash. It's a concept that seems here to stay, but I guess I'll throw another bias on the fire—I'm concerned about ghost kitchens having the potential to erode the profitability of traditional bricks and mortar spots that have far greater overhead for staff (i.e. jobs for locals) and rent. They all generally add little to the neighbourhood as well, given that the interaction with customers is at a minimum.

I opted to go the pickup route, and it was then that I realized that Pigot's is operating out of the new Craft in English Bay, perhaps the worst neighbourhood in the city for parking. I assume the takeout option is mostly limited to West End residents (although I'm told that the Pigot burgers can be ordered when dining in at Craft as a sort of in-the-know, off-the-menu item). The online ordering interface is super-simple: you choose a city (Calgary, Toronto, Vancouver), choose a delivery method (Uber, Skip, Doordash) or takeout and then click on the burgers you want and voila. 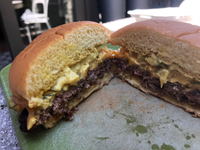 I weirdly scored a spot—albeit an illegal one—around the corner from Craft, strolled in, saw my bag waiting and beat on home. It's probably the time to mention that almost no burgers travel well, either via delivery app or in the back of my car. There's a reason that pre-pandemic, only the most stoned of us said "Let's order takeout burgers." The buns get soggy, although the move to thinner, flattop-fried smash burgers helps this a bit (Downlow Burgers' to-go set-up remains the best for travel I've come across). 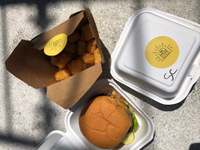 But Pigot's was pretty together upon unboxing the quasi-breathable but 100% recyclable cardboard box. The single cheese is just a hair under what I think of as a normal serving size, but as I'm a glutton, my guess is it's a tad over what Health Canada recommends. The meat comes from Beretta Farms and it's organic and hormone and antibiotic free, which is a positive. But it's from Ontario, which is not. The potato bun has the right amount of give. The dominant theme however, is the aggressive (and unadvertised) relish. The burger is supposed to come with Pigot's "famous" brown sugar onions, but if they were there, I couldn't tell thanks to the relish. That's not a negative—the relish was house-made with large, crunchy chunks of cucumber and a nice savoury bite. I was a big fan, but I like relish. If I was a die-hard cheese and beef smash burger fan I might be a bit choked.

Chef's Chen's burger, the AC, likewise had a variation of this bold relish but it had a bit more burger heft, tomatoes and a bacon aioli to stand up to it. The tots sweated like a mother in their coated cardboard box and as a result felt like they were coming out of Napoleon's pocket. I still ate them of course.

The end result is solid. The single is a pretty good deal, the AC not so much. In the context of our recent and much-debated burger draft, I don't think Pigot's would unseat any of the choices I made (although it's probably better than Nathan's last two pandering picks, and is easily better than at least one of both Anicka's and Alyssa's - you have to guess which). The burgers are quite good. Good enough to overcome the ghost kitchen/Calgary-import/TV chef aspects of the operation? Well that's up to you.